Although the water isn't as crystal clear and the sand may not be as white as the beaches in Krabi and the Andaman Sea; what Hua Hin lacks in natural beauty, it makes up for in character and the lack of young, rowdy crowds.
As Hua Hin is located on the western side of the Gulf of Thailand, it's hardly surprising that it is well-endowed with some great beaches. Most are wide and long, with generally shallow depths and very mild currents. As a result, they are safe for all the family.

Hua Hin is blessed with some attractive, accessible and family friendly beaches. As Hua Hin is situated on the Gulf of Thailand the seas are warm throughout the year, which makes swimming and other beach activities pleasurable at any time. The beaches are fairly clean and the waters shallow, which makes for a safe and enjoyable environment. In high season the beaches can be crowded, but it’s always possible to find a quieter spot. However, in the rainy season there aren’t as many visitors, the sea currents can be stronger and rain showers can be expected most days. Fortunately, it’s seldom long before the sun returns and things quickly dry up.

Hua Hin’s fine and sandy beach arcs several kilometres southwards towards Khao Takiab, which can be glimpsed in the distance. The sand quality is good and there is ample space to walk and play on the wide shore. The water is not deep and swimming is quite safe, but there are some large rocks in the sea near the main entrance and extremely sharp seashells. Heed the amusingly worded warning signs that read “Careful! The rock full of fishshell”. Hua Hin supposedly got its name due to the rocks on the beach head (Hua Hin literally translates as Head Stone in Thai). 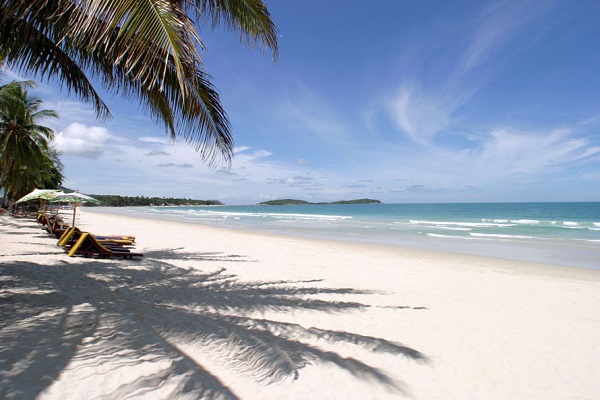 It’s possible to walk south along the shore where restaurants, some water sports and places to relax can be found, as well as sun beds and the occasional palm tree to sit beneath. It’s in this area where most visitors linger, as food and drinks are available and there are enough things to do close by. The further south you go the less crowded it becomes, but there are a few popular spots and watering holes along the way.

Heading north in the opposite direction, access to the beach is eventually hampered by wooden piers housing seafood restaurants and guesthouses, but it’s possible to rejoin the beach further along Naresdamri Road near the fishing pier and continue onwards. You’ll notice the military boats just off the coast, which are there to protect the King’s palace only a short distance away. Further north it becomes a restricted zone, which is prohibited to boats and pedestrians. It’s possible to visit the palace by using the official entrance on Petchakasem Road instead, near Soi 37.

Khao Takiab beach is a picturesque sandy stretch that gently curves from behind the mountain all the way to Suan Son Pradiphat beach a few kilometres further south.
Dominated on the northern side by the rocky hill, it’s fairly quiet and usually less busy than the beach in Hua Hin. The sand is clean and pebbly in places, and at low tide there is a wide expanse to reach the water which is very shallow and slopes gently. 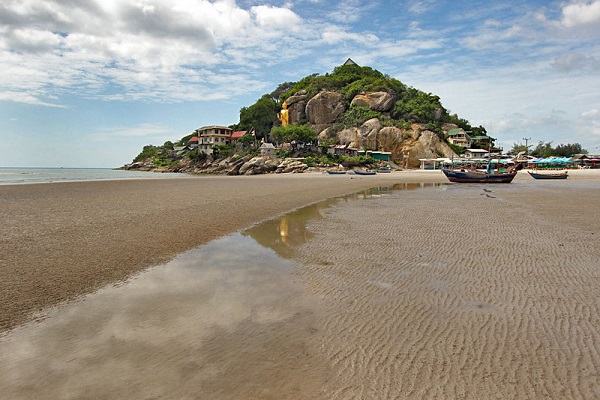 The northernmost strip is where all the restaurants and activities are located within a five minute stroll, and you’ll find the atmosphere is relaxing and low-key; you won’t even get hassled much by the beach vendors unless you really show an interest. On a weekday and during the low season you might be the only soul on the beach, but Thais tend to arrive later in the day when it’s not so hot. You might even see an impromptu game of beach football played between local children.

Visible just 800 metres from the coast are the tiny secluded islands of Koh Singto (Lion Island) and Koh Tao (Turtle Island, not to be confused with the other Koh Tao near Koh Samui). These are excellent snorkelling and fishing spots that can be reached by boat in around 20 minutes, however there are no scheduled trips so you have to organise your own transportation at Khao Takiab fishing village. Anglers can expect to find squid, grouper and red snapper in abundance amid a very pristine natural environment. Be aware that there are no facilities on the islands themselves. 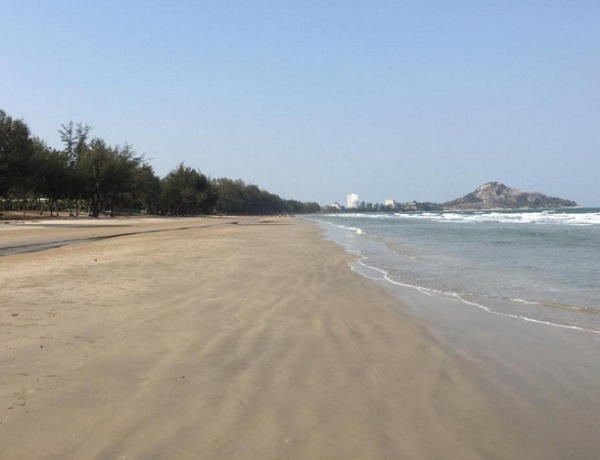 Suan Son is a very pleasant place in which to spend a few hours. The attractive and sandy beach is extremely wide and fringed by large pine trees that provide decent shade. It might appear like there’s not really much here, but there are some friendly beach vendors and a few activities are possible. For sun seekers, deck chairs and sunshades can be rented, and anybody that appreciates nature and tranquility will surely be delighted here.

Cha Am’s beach hugs a pleasant tree lined road and stretches for miles in each direction. On the clearest days, Hua Hin’s tallest hotels are visible in the distance. Many visitors to Cha Am might not be aware that the town comprises much more than the beach and adjacent roads, but most tourists simply stay near the beach as this is where all the action is, and there isn’t much reason to venture any further.

Cha Am is a popular and well known destination with a long, attractive beach that draws tourists in droves. The town has a much more laid back atmosphere than Hua Hin and is generally a lot quieter. Even so, it can be extremely busy on weekends and holidays, with coach loads of Thai visitors arriving for a few days of sun, sea and sand. The beachfront dominates the tourist part of town, which is also where most of the attractions and activities are located.