Hua Hin is a popular coastal resort in Thailand, and it belongs to the district of the same name. It is located in the Prachuap Khiri Khan province along the Gulf of Thailand. Originally a fishing village, Hua Hin was converted into a resort by the royal family in the early 1920s. The king ordered the construction of a summer palace called Wang Klai Kang Won, which means “Far From Worries Place.”
The main temple is Wat Hua Hin (or Wat Ampharam) that is located in the centre of town.
Other notable ones include Wat Bor Fai that is around 5km north of Hua Hin and where you can feed the large, sacred catfish for a small donation to the monks.
Other impressive examples of temple architecture can be found on the Pala-U road heading west out of Hua Hin at the top of the hill. You can see some wonderful examples of Buddha statues at Wat Khao Krailas and Wat Petchravud here. 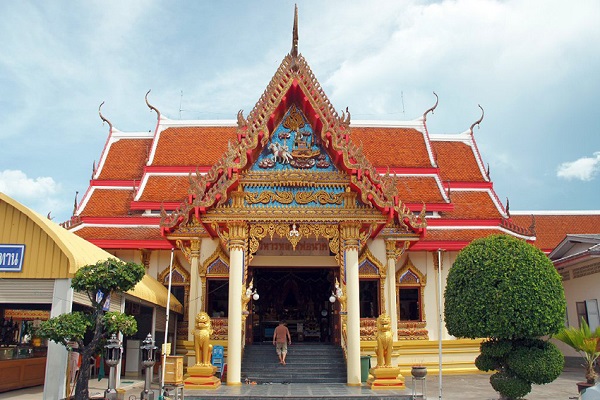 Also known as Wat Ampharam, Wat Hua Hin is the most important temple in Hua Hin. It is located in the center of town and is also a monastery. Wat Hua Hin is more of a place of worship for locals than a tourist attraction, but it does offer meditation sessions in the afternoon. Its elaborate decorations set it apart from the neighboring buildings.

The interior has murals that depict scenes from the life of Buddha, and there are golden statues of the Buddha.

Wat Huay Mongkol temple complex just out of Hua Hin is a huge place with a serene and peaceful atmosphere in a park like setting with a lake, streams and shady pavilions. The immense and impressive statue of the famous Thai monk Luang Phor Thuad is the biggest in the country. 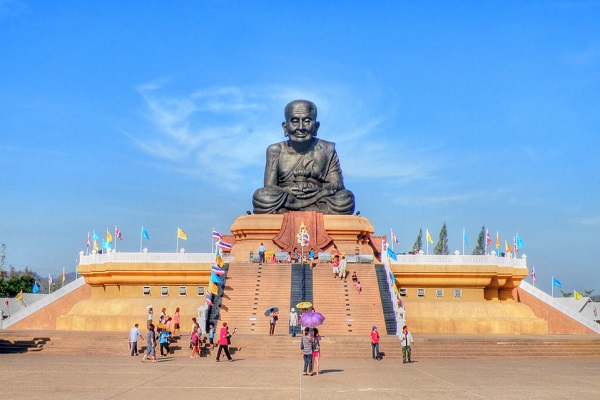 Wat Huay Mongkol is about 10 km (6.2 miles) west of Hua Hin and is a popular destination for Buddhist pilgrims. Thousands of pilgrims visit the temple every weekend to honor Thailand’s largest Buddha image of Luang Phor Tuad (1582-1682). The statue, which show the famous monk seated, is 12 meters (39.4 feet) tall. The statue sits on a pedestal with a wooden elephant on either side. Walking in circles under the belly of an elephant is supposed to bring good luck.
The entire complex is located in a park-like setting that boasts a lake, several streams, waterfalls, pavilions, bridges and many shady places. Wat Huay Mongkol also has a temple, several restaurants, shops that sell Buddhist amulets and a statue that depicts King Taksin the Great (1734-1782) on horseback.

The temple’s best known feature is the statue of Buddha that stands 20 meters (65.6 feet) tall and is located at the base of the hill. 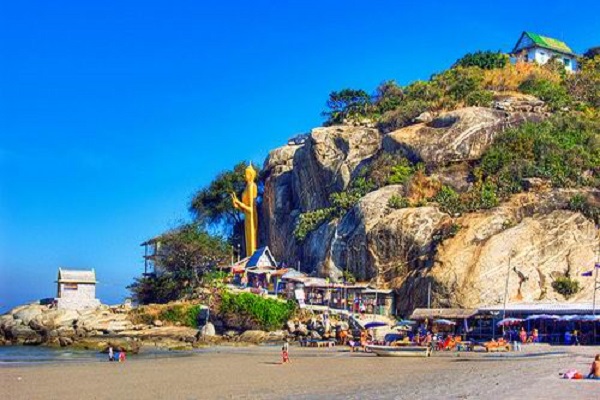 The Khao Takiab Temple is around 7 km (4.3 miles) from Hua Hin. Khao Takiab, which means “chopstick hill,” is actually the name of the village. Khao Takiab is a quiet village, but it has a beach and several seaside restaurants. The temple, which sits on top of the hill, is more formally called Wat Khao Lad. Many monkeys live in or near the temple, so it is sometimes also called “the monkey temple.”
There are several ways to reach the temple. One way is to simply climb the stairs. Visitors may pause during their climb and enjoy the view. On a very clear day, they may see as a far as the Cha-Am beach. Other transportation options include motorbike, taxi or tuk tuk.

The Khao Luang cave in Petchaburi is where King Rama IV used to come to meditate and study Buddhism. The cave is filled with a large number of Buddha images including a four meter high image ordered by King Chulalongkorn. There are a number of caverns with stalactites hanging from the ceiling.

The impressive caves are set in Khao Luang hill which is almost 100 meters high, just North of Petchaburi town. They consist of a number of caverns filled with beautifully illuminated golden Buddha images, several chedis and a great number of stalactites hanging from the ceiling.

King Mongkut (Rama IV) who reigned the Kingdom from 1851 until 1868 used the cave to study Buddhism and to meditate. He had a large number of Buddha images placed in the Khao Luang cave.

His successor to the throne, King Chulalongkorn ordered a large 4 meter high Buddha image be made and placed in the cave dedicated to Kings Rama III and Rama IV. He also had a number of older Buddha images restored.
The atmosphere inside the cave is serene and quiet, Buddhist people will pay respect to the Buddha images burning candles and incense sticks. There are about 170 Buddha images in Khao Luang cave. One of the most beautiful is a huge reclining Buddha image, symbolizing the passing of the Buddha into final Nirvana.